Although she is probably one of the smallest large dogs on the circuit, she is so well proportioned with great construction, athleticism and attitude she more than holds her own when competing against at the highest level.

Dixie loves the European style handling and prefers to chase me  rather than be driven from behind, although we are still work in progress our partnership really took a leap forward after training with Janita and Jaakko.

Dixie started competing June 2011, winning into G5 by the end of her 1st  year. 2012 we enjoyed ourselves with novice classes and qualified for a few of  the novice finals along the way Camddwr Cup, Pro Plan, Adams Derby and ending the year winning Tuff E Nuff final at UKA finals day.

Fast forward to early 2013 and we won our 4th G6 class qualifying
us to compete against the best in G7 champ classes.

Enjoying competing internationally we tried out for WAO England team 2013 to compete in Spain, while Bigs made the England team Dixie travelled as reserve, great experience for a young dog.

Highlights for 2013 were qualifying for the Senior Olympia semi’s at Weardale and then winning our first CC at Wilton, really unexpected but made me realise how far our partnership had come. I am looking forward to 2014, we have been selected as members of Team GB agility squad and really enjoyed first training sessions, next stop is Crufts and probably the highlight so far
– Champ. 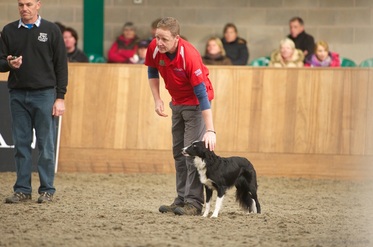